Pick of the Week: Ungifted by Gordon Korman

I’ve been casually picking my way through my daughter’s middle school summer reading list. First, because I can’t seem to find any grownup books I want to read. And second, because I’m just plain interested. Have middle school reading lists changed over the years? I managed to extract from my brain a memory of one of my own mandated summer reads from years ago: John Knowles’s A Separate Peace, with its wholly surprising (at least to me at the time) ending, one I distinctly remember I unprepared for—in a bad way.

Ada’s book list seems half as serious as mine was once upon a time—and by that, I don’t mean less serious, but rather, that half the list is serious (biographies of Eleanor of Aquataine) and half is straight-up fun to read. My favorite book on the list so far is this: 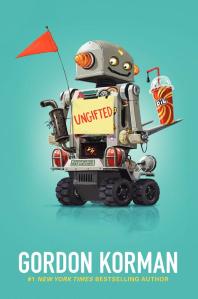 by an author who has previously brought us some excellent (and pretty serious) trilogies about things like delinquent teens being set adrift on a sailing vessel to learn teamwork and other societally beneficial practices. And while Gordon Korman has whipped up another tale of teen delinquency here, it’s funny this go-round. Kind of like an older-kid version of Captain Underpants, only with actual redemptive value at the end—along the lines, perhaps, of Richard Linklater’s School of Rock, in which a mild ne’er-do-well type tries to take advantage of a group of extremely smart kids and winds up having his life enhanced by them and vice-versa. A classic plot, but no less enjoyable for its familiarity!