A Pick via Canada via Japan via New York

I’ve wondered for years what all the fuss was about for this book: 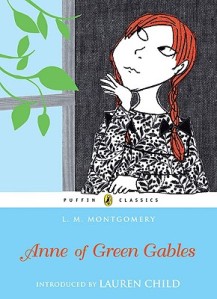 Wondered, that is, while knowing nothing about it save that it is intensely popular in Japan—so much so that honeymoon couples visit Prince Edward Island in homage to the title character, who makes her home on the Canadian curl of land that hovers due north of Nova Scotia. Wondered without feeling remotely compelled to pick it up and find out for myself. It was never on my radar as a kid; or maybe, by the time I learned about it, I was already far more interested in reading books about magic and time travel (see last week’s post) than anything that dipped its toe in realism, and potentially unhappy realism at that.

I read ANNE OF GREEN GABLES in one long sitting a few days ago. And if I’d ever been compelled to pick it up as a girl, I’m pretty sure that after the first  chapter I would have put it right back down. I always hated books that threatened unfairness, and the initial pages of Lucy Maud Montgomery’s book do not seem to bode well for its heroine: Anne Shirley, orphan girl of ten who has been sent from the asylum to the island by mistake, a boy being wanted, not a girl. These days, being able to see through the writerly set-up, I plodded past the opening tension. I’m glad I did—the book is worth discovering after so many years of my own neglect of it.

It offers plenty of the easy things a young reader might want: an idyllic setting, amusing hijinks, a protagonist to root for—although, as Margaret Atwood points out, Anne herself barely changes in the course of the story; rather, it is Marilla, one of her adopters, who undergoes a gradual but radical transformation of character thanks to the influence of her chatterbox charge. Actually, some of Anne’s self-involved ramblings did get on my nerves now and then; and some of her “scrapes” begin to seem anecdotal after a point. But the language of the novel is fresh—almost contemporary—and  it’s hard to believe that it was written in 1908.

Luckily, by the time Anne’s chatter starts to be wearisome, a reader is already well-invested in discovering what will become of the hard-working, red-headed optimist. Although I can’t say the same about ANNE OF THE ISLAND, the second of the sequels, which in the absence of ANNE OF AVONLEA on the library shelves, I picked up straight after. Anne’s become something of a prig by the time she goes off to college; better to find her, and keep her, where she begins among the ponds and flowering trees of her beloved PEI.